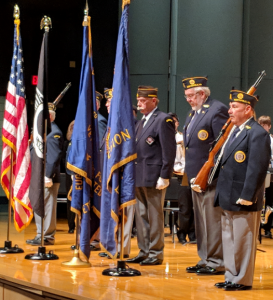 Yesterday, Northfield Beyond the Yellow Ribbon (NBTYR) hosted the 100th Veterans Day Ceremony at the Northfield Middle School. The Northfield High School band provided music with the Northfield Youth Choir singing the “Star Spangled Banner.” Members of the Stanton Civil Air Patrol presented the Memorial Table. Special guest Doug Carr shared the history of the North Platte Canteen. Started in 1941 by a young woman named Rae Wilson, the townspeople pooled every resource to feed every troop train through town, an endeavor that would last for 54 months, involve 12,000 volunteers (and more beyond) and serve more than 6 million service men and women. Local American Legion Commander Michelle Haas Bornick highlighted service women, saying, “They’re proudly serving in jobs that were once thought to be for men only. We know have women who serve in the infantry, in the calvary, on submarines, who hold the title of ranger, who fly with the Blue Angels, who are leading traditional male companies who have been chosen to lead combat commands and have earned the titles of general and admiral.” Women make up 15% of the active duty military. Bornick thanked the men who encouraged women. END_OF_DOCUMENT_TOKEN_TO_BE_REPLACED

A pair with perennial contact with police are back in jail. 27-year-old Jake Wingen and 32-year-old Lekeisha Hofbauer are charged with Felony 5th Degree Possession stemming from an incident on Tuesday. A Cannon River Drug Task Force agent spotted Hofbauer inside the Hy-Vee in Faribault. In the parking lot was Wingen, who had an active warrant. The pair had been in a van, driven and owned by someone else. Agents searched it and found just about a gram of methamphetamine, belonging to Wingen, and a needle. Hofbauer’s backpack contained over six grams of meth. She’s on a conditional release related to seven cases in the past two years. Hofbauer’s court appearance is November 20, 2019 where she’ll face this new charges and pleas to the seven other cases pending against her, one involving firearms. Wingen will appear on November 19.  END_OF_DOCUMENT_TOKEN_TO_BE_REPLACED