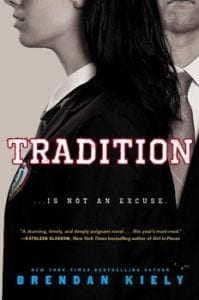 Teri Knight talks with New York Times Best selling author, Brendan Kiely on his new book, “Tradition – is not an excuse”.  The novel explores the traditions of an elite prep school, the fictitious Fullbrook Academy. Male athletes are encouraged toward violence and females are encouraged to do as they’re told.  Kiely, a former teacher, was inspired to write “Tradition – is not an excuse”, after what he witnessed and the #metoo movement. The novel follows 2 students, neither of which feel they belong.  He talks about what it was like to write in the voice of 2 distinct people, how we can shift perspectives and have the courage to call out bad behavior.  brendankiely.com

Tradition – is not an excuse by Brendan Kiely