FARIBAULT – On Tuesday, January 7th, at about 8:17pm, Faribault officers were dispatched to a reported robbery in progress at JoAnn Fabrics, 200 Western Avenue. The suspect was gone at the time officers arrived. Two employees were on duty at the time. Employees reported the suspect entered the store a few minutes earlier and stated he was waiting for a ride. The suspect approached one employee asking to buy some merchandise. When the employee approached the cash register, the suspect approached her from behind, poked her in the back with an object and told her to open the register. The employee stated she could not, and the suspect instructed her to scan merchandise and open the register. The suspect hit the employee in the back 2 – 3 times and fled the store. The clerk described the weapon as a baton. The employee suffered bruising from the assault, but did not require medical attention. No money or merchandise was taken. END_OF_DOCUMENT_TOKEN_TO_BE_REPLACED 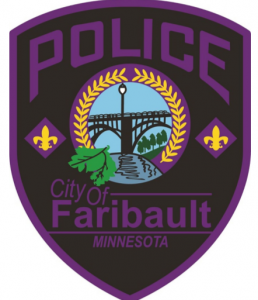 FARIBAULT – October is designated as Domestic Violence Awareness Month. To help promote public awareness of this crime, the Faribault Police Department has created a purple edition of our shoulder patch. Purple was chosen as the representative color for this effort.

Faribault officers will be wearing the purple patch on their uniforms through the month. In memory of our friend, Barb Larson, the Faribault Police Department has partnered with the Faribault Area Chamber of Commerce and Tourism to make the limited edition patches available for a $20 donation. Patches are available at the front window of the police department and the Chamber. All proceeds will be donated to the HOPE Center, our local domestic violence advocacy provider. END_OF_DOCUMENT_TOKEN_TO_BE_REPLACED

Potentially deadly situation ends with no one hurt…

Thanks to Faribault police officers’ actions.  Police Chief Andy Bohlen said it “was a very scary situation”.  He explained that a Sgt. stopped a vehicle with SD plates for an equipment violation (no tail lights).  The driver was, “obviously acting impaired, very verbally combative, did not want to cooperate with law enforcement”.  He continued, “at one point was reaching around in the back seat.  Officers were finally able to get control of that person and within the backseat, within reach, was a sawed off shotgun”.  He said they don’t know if the suspects were going to try to use it on the officers but they, “certainly weren’t acting appropriate”.  They’re still doing some END_OF_DOCUMENT_TOKEN_TO_BE_REPLACED

A man was flown by air ambulance to North Memorial Hospital after a car/ tractor crash last night. The female driver was traveling west on 250th st. west at Elmore Avenue in Morristown when she struck a tractor parked along the roadside. Rice County deputies were called to the scene just before 9 o’clock.   The man is reported in stable condition, however, as of this press release, his injuries are not known.   The driver was taken to the hospital by a private party. The driver of the tractor was not injured.  We hope to have an updated status tomorrow morning.  UPDATED with names:  Mary O’Connor was the driver.  Gene O’Connor was the passenger.

A “scary call”, that’s what Faribault Police Chief Andy Bohlen called the situation his officers walked into when a man threatened an employee last Thursday at the Jennie-O turkey plant.  Faribault police received a call just after 3am of an intoxicated screaming man.  When they arrived, there were 10 to 15 employees standing outside the south side of the building, a large man staring at them.  According to the criminal complaint, 27 year old Nicholas Paul Eustice of Faribault

had followed an employee to his car and threatened to stab him with a broken beer bottle.  Eustice followed the man into the breakroom.  That’s when security called police.  Chief Bohlen, “they could smell alcohol on him, I don’t know if there was a mental health was an issue but clearly when you’re at a point when you’re threatening unknown people with weapons there’s a concern for the officer safety as well as the public”.  At this point there seems to be no connection to the person threatened or Jennie-O.  When officers approached, Eustice refused to take his hands out of his pockets and resisted arrest.  They were able to handcuff him.  A pat down revealed a small knife and a full flask, which smelled like alcohol. While it’s not clear if this is a mental health issue,  Bohlen said, in general, it’s a tough position for law enforcement, “certainly mental health is something, again, that, we all in this State need to address and figure out how we deal with because law enforcement is the first one that’s called when people are not acting right”.  He added, “we have to deal with the facts we’re given at the time and in this particular situation on the early morning of the 31st, we’re lucky nobody got hurt.  The person was armed and he was threatening people earlier with a weapon and luckily he was taken into custody, some good police work and, hopefully, they’ll get some help for this guy”.  Eustice is facing 2nd degree assault with a dangerous weapon, threats of violence with intent to terrorize and more.  He’s currently in the Rice Co. jail.  eustice complaint

UPDATE:  During a pat-down, they found that Eustice had a knife on him and a full flask of alcohol.  They also found the broken beer bottle he’d threatened an employee with.  Eustice resisted arrest and is facing multiple charges.  He was released on $3,000 conditional bond yesterday afternoon.  His next court appearance is April 13th.

Every Student Succeeds Act, ESSA, takes the place of No Child Left Behind.  Superintendent Dr. Chris Richardson commented that the big difference is the NCLB was very much a government program, whereas ESSA puts the power back to the States and local school districts.  Richardson says it’s more appropriate to put the control into local hands.  ESSA still requires assessments in grades 3 through 8 and at high school reading writing and science.  However the sanctions are gone, the State will decide what actions should be taken, if necessary.  Worlds Best Workforce will be the guide in Minnesota.  Richardson said that includes Kindergartners Ready to Learn, 3rd graders Literate, not being an achievement gap between students of any sort, students career and college ready and students graduating on time.  Richardson says it will take time to create the rules and regulations to go by.  He’s anticipating a no man’s land in the meantime.