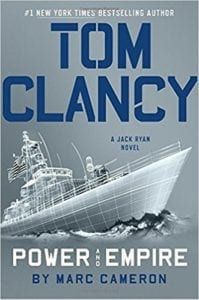 On today’s 15 with the Author, Teri Knight talks with Marc Cameron about the latest Jack Ryan novel, “Power and Empire”.  With the death of Tom Clancy, who originated the Jack Ryan series, his former collaborators carried on and now they’re passing the torch off to Marc.   Cameron is a twenty-nine-year law enforcement veteran who has served as a uniformed police officer, SWAT officer, detective, and a U.S. Marshal specializing in dignitary protection.  He’s also a New York Times bestselling author.  Cameron talks about what it’s like to write for such an iconic character and what it’s like to work deep undercover and see the underbelly of humanity.    marccameronbooks