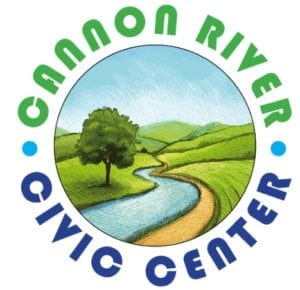 It will go to the voters.  In a “standing room only” Northfield Council Chambers, Councilors unanimously approved putting the question of a new civic center on the November ballot.  The referendum will ask voters to approve a new ½ cent sales tax, up to a $20 motor vehicle excise tax and a property tax increase.  The total cost for a 2 sheet arena will be just over $21 million. As for the actual property tax increase that will be $8.8 million.  On a $200,000 home, the estimated cost would be $90 a year. Public Works Director Dave Bennett explains, “and then along with that there’s $3.4 million from private fundraising and the sale of the (current) arena, grants bringing in another $2 million”.  A second sheet of ice, “that would be used

just in the winter time is about $5.4 million and, really, that’s coming from outside sources, really not supported through the property levy”.  There is a sunset on the dollars raised through the levy.  Bennett said within the authorization is a cap of $17.8 million or 20 years, certainly if we have more growth in our sales and our sales tax goes up, it could offset the property tax”.  Seventy percent of the dollars raised in taxes will go toward the arena, thirty percent will go to parks and trails improvements. The caveat is that Dundas agree to add a ½ cent sales tax too.  They would get 30% for their parks and trails. Saying some of her constituents thought the term “civic center” was disingenuous, it took nearly 45 minutes to decide to change the wording in the ballot to call the facility “a multipurpose combination 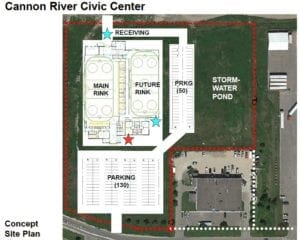 civic center and ice arena”.  The Northfield Hockey association, which has been the driving force behind it, had been told they needed to incorporate the wider community. For 6 months of the year, the 2nd sheet of ice would provide opportunities for any number of events. Hockey Coach and Arena committee member Brent Bielenberg said they’ve been working on this for 18 months but really, for years.  He was in studio with Chris Kennelly talking further about the Cannon River Civic Center. Their entire interview is on kymnradio.net. Education of the ballot question will continue to take place.   This LINK is to the Cannon River Civic Center.  The following link includes the City’s audit.  2018_06_19 Combined Supplemental Memo 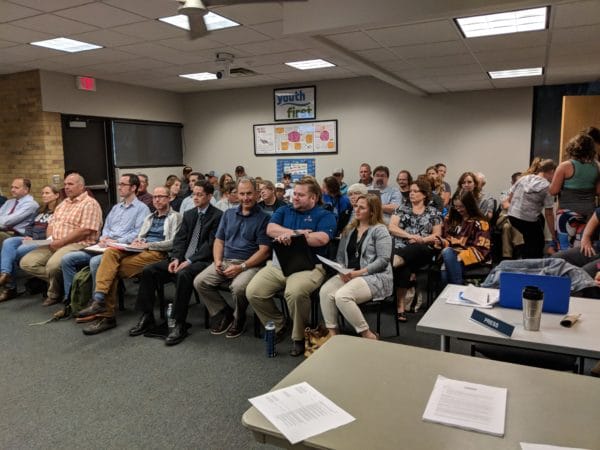 Northfield Hospital’s downtown Express Care Clinic is fully up and running.  CEO Steve Underdahl said, “we’re getting a lot of nice feedback from folks that have said this is really helpful for my family, it’s great that it’s downtown and it’s great that it’s available after hours”.  They just started a couple of weeks ago with weekend hours trying to accommodate those who can’t make daytime appointments.  Sterling Drug is completely revamped with a lowered countertop and a nice parking lot! Right now the Clinic is seeing about 10 people a day but Underdahl says, they’ll see a lot more as Fall and winter illnesses ramp up.  In separate news, the Hospital’s long term care center earned a 5 star rating for the 7th year in a row from CMS, Centers for Medicare and Medicaid Services.

Nibble your way thru Northfield

It’s the Taste Tour tomorrow!  Northfield Downtown Development Corporation Executive Director, Jenni Roney, explains that the great thing about this format is that you walk to each of the restaurants so you burn calories along the way, “and you can just continue eating!”.  It’s from 5 to 8pm with at least 10 eating establishments participating along with the 2 breweries.  You do need to buy tickets. Tickets are a dollar a piece and now available  at the Business and Tourism office at 19 Bridge Square.   You can also purchase them at the event.  For a list of all the participating establishments go to downtownnorthfield.org.

The Minnesota Department of Agriculture (MDA) has awarded Value Added Grant funding to sixteen Minnesota agricultural producers and processors. Grant Specialist Julianne LaClair said they’re excited to award funding for companies who are growing their businesses, creating new jobs, and adding to Minnesota’s economy.  The first round of 2018 Grant awardees include Krenik’s Meat Processing, Inc. in Montgomery and Curly Girlz Candy out of Medford. More than $608,000 was awarded in this round. The next round of Value Added Grants will be posted in mid-July and will be due in September.