The Northfield Council has been discussing a ½ cent sales tax to fund parks and recreation. Administrator Martig noted that in 2007, the City funded the park system at a little over $140,000 a year. Of course the recession hit and funding was cut. He said, at this time, the City now puts in about $94,000 a year into that fund. There are currently 35 parks with over 500 acres, 23 miles of trails and they want to add. A local sales tax must be voted on by the citizens but the ask must first be approved by State legislators. This local sales tax must have a regional

effect to be considered, Martig explained, “sports, health and recreation related, public restrooms, potentially river corridor enhancements. We had some discussions about the Ice Arena and we also did get preliminary results from the Parks Survey that was done”. Total surveys delivered were over 5,000 with 749 completed, that’s a 13.57% response rate. Those preliminary results show about 75% of residents use the parks, the most used being Bridge Square and Riverwalk, followed by Sechler and Memorial park where the pool and skateboard park is. The greatest support for investment were for public restrooms, new/enhanced walking trails and biking trails. Nearly 90% of those responding felt there should be some repairs made to the current Ice Arena, however, a side note in the packet from City staff adds that “building a new multi-use or single use ice arena receives greater support than repairing/remodeling the existing ice arena”. Additionally, just over half of those respondents support a ½ cent sales tax, although some “with reservation”. The council will vote on Tuesday whether to approve asking legislators to put the item on the November ballot. Updated information on Sales Tax option and Park Survey 01-14-2020 Supplemental Agenda Background Memo no 2 (1) You can find the video of the Council work session on the City’s website and here’s a LINK to the packet information.

The Northfield School Board held their annual Organizational meeting this week. Julie Pritchard was re-elected to Chair, Amy Goerwitz was elected Vice Chair, Jeff Quinnell is Treasurer and Noel Stratmoen will continue as Secretary. The Board also heard the annual improvement plans from the two Charter schools, Arcadia and Prairie Creek. Superintendent Dr. Matt Hillmann said, “we will continue our history of supporting these two fine Charter Schools in our community. We are one of only three traditional public school systems remaining in the state to authorize charter schools”.  The Board completed their site visits of the schools in December. 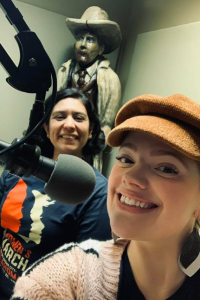 There’s no women’s march at the Capital this year so a small group of Northfield women took it upon themselves to create one locally. Sarah Missler and Claudia Gonzalez George met through Northfield Happenings on Facebook and the event, taking place tomorrow, began to take shape. They got together, “and it’s been such a great opportunity to meet more women in the beginning, come together and create something where the community can all come together as one as well”.  Gonzalez George said the goal of the Women’s March is, “kind of an awareness tool. And so many people here are already involved in civil actions or local causes that the march is really a place for all of us to come together, get to know each other, network, connect with one another and then also connect with the State Women’s march”. The march will start at Ames Park at 11 o’clock tomorrow morning and continue on sidewalks to Bridge Square. After the march, they’ll gather at Imminent Brewing. They’re asking attendees to bring new feminine hygiene products to donate to our local CAC. Follow their Facebook page for updates.

Be sure to check our website for updates on closings and cancellations due to the storm.