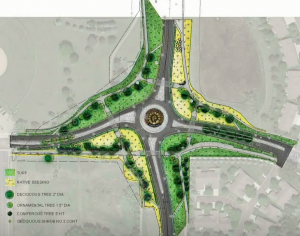 Expect big changes at Hwy 246 and Jefferson Pkwy this year when work begins on a roundabout at the intersection. The Northfield Council voted to approve the final design and open bids on February 27th and award the project March 10th. This intersection has been debated for years. Many felt a stoplight would be appropriate, however, an intersection control study in 2016 stated there wasn’t enough traffic for MnDot to place a stoplight there. Administrator Martig added, “another negative too, even if we could add a signal, is there is some evidence that a signal in that location could actually increase speeds allowing more direct through traffic. With greater speeds comes great severity of

crashes”. The price tag jumped up by $1.4 million to a total of $4.7 million, with about $2.5 million coming from grants and state aid. As for the additional costs, poor soils meant additional earth work. City Engineer Dave Bennett continued, “the intersection had to be raised some so that the underpasses would not go under water and be submerged and additional utility costs related to the storm sewer and watermain. So most of the costs made by the additional increases will be covered by State Aid and our Utility Funds”. Martig said any dollars taken form the utilities funds would not alter what residents currently pay. SEH Consultant, Carl Weisenborn, shared some changes they made to address some of the increased cost, “what we have done is we’ve substantially removed, substantially reduced and removed almost all of the shrubs  and deciduous plant material from the project with the exception of the roundabout. The roundabout itself is still heavily planted”. Bennett said the intersection would likely close in May with construction through October. In the contract, they have included, “an incentive of $1500 a day with a maximum of 45 days so $67,000 for them to get the project done before October 21st”. The vote was 6 to 1 in favor with Councilor DeLong voting no due to the increased cost. Link to council video is HERE.

There’s a new Chair of the NAFRS Joint Powers Board. Elizabeth Hasse was voted in at their last meeting, Brad Ness is Vice Chair and Todd Edwardsen is replacing Anne Haddad as a Northfield representative. The Board also voted to hold quarterly meetings rather than monthly. Chief Franek explained, “I think the Board decided as a group, from me looking from the outside in because I cannot vote, it looked as though we were getting things wrapped up and there’s not that much discussion there, things to do”.  One of the major projects being the facility itself. Hasse said, “we have set out for all those quarterly meetings exactly what we propose to be speaking about during each meeting so now the meetings are going to be jam packed because there will be lots of items to talk about. We also have the opportunity, any time that there’s an issue, a Board member, we can call a meeting “.  Ness added that they believe they can accomplish what needs to be done. He is also Chair of the Finance committee and added that some of the committees will continue to meet monthly. Dundas Mayor Switzer was not in favor of the change believing the Board needs to continue oversight. As for equipment, the heavy rescue truck has been ordered and they expect delivery in late summer. This truck is community supported. They still need about $200,000 and continue to take donations.

If you have any vinyl records laying around, the Northfield Library would love to have them. Library Assistant Tyler Gardner said, with the resurgence of interest in the medium, they wanted to offer it at the library. Right now they have a small collection and a turntable where you will be able to listen on-site only. They’ll accept vinyl in good condition including the sleeve. They want 33’s and 45’s but cannot accept 78’s. They’re looking for any genre. Drop them off at the library. Gardner’s full interview is HERE.