ROCHESTER, MN – Motorists should be alert beginning April 8 for construction crews installing delineator posts that are part of a safety improvement project in southeast Minnesota, according to the Minnesota Department of Transportation.
A MnDOT contractor is installing 5,540 delineator posts in southeast Minnesota along all unlighted,four-lane rural highways. The posts are installed about 1/10th of a mile apart. The statewide project is designed to aid traveler safety, especially during night and adverse weather conditions when pavement markings may be hard to see.  Click below for more details on which roads will be impacted: RICE COUNTY — Severe Weather Awareness Week takes place April 8-12 this year, with the statewide tornado drills on Thursday, April 11.  Historically, early springtime is “flood season” in our state — but in 1998 it was only late March when violent storms brought 13 tornadoes to St. Peter and Comfrey and also 1 to Lonsdale and rural Rice County areas east of Lonsdale. On July 13, 2013, Rice County received over 8 inches of rain in a short time period over areas in the northern half of the county causing flash flooding conditions and washing roads away throughout those areas. Late September is typically considered a “dry time” – yet on September 20, 2018, September 22, 2010 and again in 2017, severe weather struck southern Minnesota with several tornadoes and/or flooding, including
communities in Rice County.  READ THE FULL PRESS RELEASE BELOW:

Rice County Sheriff Troy Dunn will be in studio Thursday morning at 7:20 with more!

The City is asking for public input about snow removal in the city after a record year of snow using Polco, a public engagement platform.

Residents can participate on Polco by downloading the Polco app for Android or iOS, or visiting the City’s web page on Polco at https://polco.us/groups/city/northfield-mn. QR codes on our fliers allow easy access to the Polco website. Residents’ individual information is never shared and cannot be accessed by the City.

Links to Polco can also be found on the City’s website https://www.ci.northfield.mn.us/1261/Polco, City’s Facebook and Twitter feed. English and Spanish paper surveys are available at the Northfield Public Library and Motor Vehicle Services at City Hall.

If you would like more information about this topic, please contact Communications & Human Resources Director Michelle Mahowald at (507) 645-3012 or email [email protected] 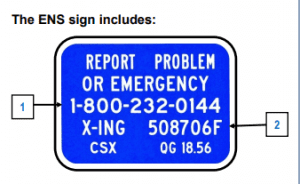 The Minnesota Department of Transportation reminds motorists to use railroad emergency notification system signs when there is a safety issue or emergency situation at a rail grade crossing.
The blue and white signs are posted near the crossing on both sides of the road and should be clearly visible to the motorist. The emergency notification system sign includes the railroad’s emergency contact phone number and the U.S. Department of Transportation’s national crossing phone number, which identifies the exact
location of the crossing to the railroads.  READ the full press release below with complete information:

Northfield Shares has set up a new system for volunteers.  There is more information on their website.    Here is the LINK

With the continued rise of the Cannon River, businesses and homeowners are already preparing for flooding, whether it’s immediate or sometime during this spring. Northfield Shares has established a new* online system that allows: