A repeat sex offender pled guilty in a child pornography case in Rice County. County Attorney John Fossum reports that 38 year old Ross Wenner of rural Rice County entered guilty pleas in District Court on Friday to three felony counts pf Criminal Sexual Predatory Conduct and Possession and Dissemination of Pornographic Work by a Registered Predatory Offender. Because of his criminal history, Wenner is expected to be sentenced to up to 21 years in prison and be on supervised release, or parole, for the rest of his life. Sentencing is scheduled for May 19th. Fossum prosecuted the case. He remarked, “Wenner is a dangerous offender who requires a lengthy sentence. This resolution achieves that and will protect the community”. Wenner was released from prison as a level three sex offender under Department

From the Public Notification when Wenner was released on supervised parole in March of 2016 into Cannon City Township: Offender has a history of attempted kidnapping and sexual contact with minor female victims (age 11-14). Offender attempted to coerce 4 victims to enter his vehicle. Offender engaged in sexual contact with the 5th victim. Contact included penetration. Offender gained access to most victims by approaching them in public. Offender gained access to another victim by entering her home without permission. Offender was not known to victims.

Kline resigns as Dundas Chief, Murray to be made Interim

Dundas Police Chief Eric Kline submitted his resignation effective Friday. The Dundas Council will vote tonight on making Officer Wade Murray the Interim Chief, the only full time employee. The City has one part-time officer and are searching for another. The Dundas Council will be voting tonight to allow on-sale liquor at Ruth’s on Stafford.They will also hold a discussion regarding NAFRS – Northfield Area Fire and Rescue Service. NAFRS Treasurer Glen Castore will be at the meeting to talk about their Joint Powers Board changing from monthly meetings to quarterly meetings. Mayor Glenn Switzer has expressed resistance to the idea as he feels there’s a lack of oversight on the Board’s part.  [NAFRS Joint Powers Board meets Jan. 9th at 8am and this item is on their agenda for a vote] Administrator Teppen will be in studio tomorrow morning at 8:45 with a recap.

The Northfield Council meets tomorrow night after a month off. They’ll hold a closed session to develop or consider offers for the purchase of property at 700 Hwy 3 North, and 440 Water St N. On their regular agenda is raising the Tobacco age to 21, items involving the 2020 mill and overlay project and Council will receive an update on a resolution for Request for Local Sales Tax Authorization from the State of Minnesota. They want the money for parks and recreation. One of the questions on the recent survey sent out to residents asks about a sales tax and also specifically asks about a hockey arena, an item voters turned down in 2018. You can comment on any item now through noon tomorrow on the city’s website under City Council. 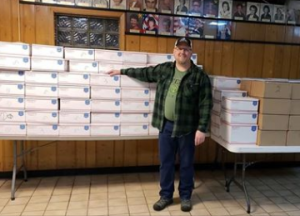 Taylor Truck Line is a drop off site for the 3rd Annual Community Military Care Package Event! Donate to active duty Men and Women. Some suggested items include Trail mixes, nuts, Beef Jerky, protein or granola bars, candy, gum, drink mix packets, package cookies and personal care items for men and women. The address is 801 Hwy 3 in Northfield. They are collecting through January 23rd. On January 25th, Kraft-Ostrom American Legion Post 142 of Cannon Falls will be hosting the packing Event! The Community is invited to help pack boxes starting at noon.