Northfield Mayor Rhonda Pownell and Councilors approved asking the legislature to allow the City to put a ½ cent local sales tax on the November ballot and they’re not alone. According to the Star Tribune, more Minnesota cities are imposing local sales taxes than any time in state history. And some legislators are worried it could create unfair advantages for communities with more retailers. In 2019, eighteen cities were allowed to impose or extend a sales tax, there were fourteen in 2017. A decade ago there were fewer than two per year. A lobbyist for the League of MN Cities is estimating about a dozen cities will ask this year, including Northfield. Legislators changed the rules slightly last year, by requiring cities to ask permission before putting it on the ballot and to have

up to five more defined projects with regional appeal. While the tax is appealing to Mayors and council members who are looking to relieve the property tax burden, state lawmakers are warning of increased inequality between cities. DFLer Marquart of Dillworth is also concerned the sales tax option could undermine Local Government Aid, dollars cities receive based on a formula. Northfield received $3.2 million last year in LGA. Republican Sen. Chamberlain, chairman of the Senate tax committee, believes cities need to start restricting their spending and determining a want versus a need. While adding that this is not a bad tool, there needs to be better oversight and balance.

In response to the closing of Farmington’s only grocery store, Loaves and Fishes opened a new site and a mobile food pantry called Open Door will offer a “pop-up produce stand” at the Senior Center. Additionally, Loaves and Fishes will work with Faith United Methodist Church which offers free weekly meals. Open Door will provide monthly visits to Rambling River Center and Spruce Place apartments, a senior living facility. Family Fresh, the grocery chain owned by Spartan Nash, closed it’s doors at the end of December. Many who live in Farmington commute to jobs and grocery shop at bigger chains. Both Hy-Vee and Aldi have purchased farmland in Vermillion Crossings for future stores. In the meantime, Loaves and Fishes is trying to serve the community members who aren’t as mobile. 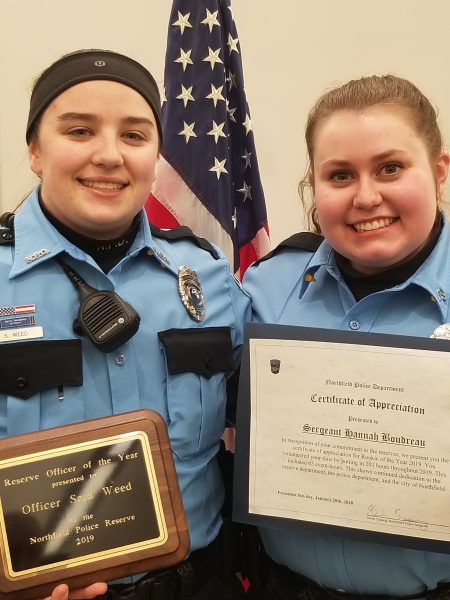 At their annual recognition meeting several volunteer Northfield Police Reservists were recognized for their outstanding work during 2019. Reserve Field Training Officer Sara Weed was presented with the Reserve Officer of the Year plaque. Sara joined the Police Reserves in March of 2019 and volunteered a total of 386 hours for the year. Northfield Sgt. Kevin Tussing said Sara is an exceptional reserve officer, providing great leadership within the organization. Officer Weed also serves as a volunteer Explorer with the Minnesota State Patrol serving as a Lieutenant.  Police Reserve Sergeant Hannah Boudreau was recognized as the 2019 Rookie of the Year. Sgt. Boudreau joined this volunteer unit in November of 2018 and rose to the rank of Sergeant not too long after that. Hannah volunteered 203 hours throughout the year and always has a strong voice within the organization. Other Reserves recognized were; Captain Josh Rich, Sergeant Justin Wagner, Officer Sarah Kalsow, Officer Brian Jensen, Officer Cody Kruse, and former Police Reserve now full time Northfield Police Officer, Champange Eiklenborg. The full press release: Press Release Nfld Reserve Recognition