Submitted by Julie Eddy of the DJJD Ambassador Program: (THE Queen! KYMN’s words, not Julie’s!) 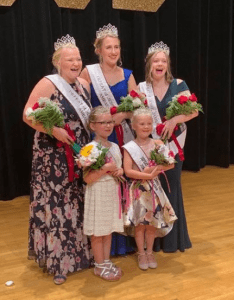 It was an exciting evening Friday at the Northfield Middle School when the Defeat of Jesse James Days selected five new 2020 Ambassadors to reign over the upcoming celebration and promote Northfield over the next year. Twenty-two candidates participated to an auditorium full of family, friends and dignitaries from over 30 different communities throughout the state, known as the Sparkle Section.

The three new ambassadors are Kaia Schomberg, Audrey Pagel and Lilly King.  The two new Junior Ambassadors are Lilah Paukert and Logyn Otte. Lilly King was also awarded the Golden Heart Award which is an award voted on by the candidates as the person who displays the most warmth, selflessness, helping others, volunteers tirelessly, passionate, possesses utmost integrity and is a positive role model. Lilly received $250 for this award which is donated by Landmark Homes.

The selection panel which was made up of three out-of-town individuals who look for communication skills, poise, personality and most importantly a team of five that will work together over the next year. They conducted formal interviews, social judging and a luncheon last weekend with all the candidates.

During the prior two months all the candidates participated in a number of activities including volunteering at Millstream Commons, Three Links Golf Tournament, DJJD Hog Roast, distributing brochures to downtown businesses, Laura Baker Services Association Family Fun Day, volunteered at Feed My Starving Children and a pancake breakfast fundraiser.  They also enjoyed a bowling day with the current ambassadors, had etiquette/image training, mock interview sessions, as well as several rehearsals for coronation.

The outgoing 2019 DJJD Ambassadors, made up of Alyssa Koktavy, Jaime Rice and Gabriella Vargas along with  Junior Ambassadors Emalyn Koktavy and Malia Peterson, all gave heartfelt speeches about how this past year has made them much more strong and confident.  Alyssa, Jaime and Gabriella were each presented with a $2,000 scholarship from Galen Malecha, DJJD General Chair. The Juniors were given gift cards in appreciation of their year.

It was also announced by Aquatennial Queen of the Lakes Jennifer Anderson that 2019 DJJD Ambassador Alyssa Koktavy will represent Northfield at next year’s Minneapolis Aquatennial week.

Along with reigning over the upcoming DJJD celebration, the ambassadors will make over 90 appearances around the state promoting Northfield and volunteering and growing into leadership roles.