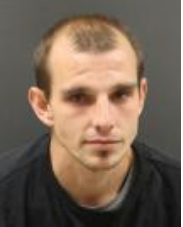 Yesterday, Faribault Police detectives executed a search warrant at a Faribault residence in relation to numerous burglary investigations. 28-year-old Austin Steven Veal was arrested. In a post-Miranda [warning] interview, Veal admitted to committing several of the burglaries. Over the past two weeks, Faribault officers have responded to numerous burglaries of businesses and commercial buildings in Faribault. Detectives are currently investigating approximately 14 of them. During the search warrant, detectives seized numerous items which had been reported stolen, including three safes, keys, office equipment and money. Detectives were able to identify Veal through one business’ security video surveillance. A photo of the suspect was quickly identified by several police officers and staff as Veal, which led to the search warrant. Faribault Police Chief Andy Bohlen said, “This string of burglaries were solved through great detective work and images provided

by a security video at one business. We encourage business owners to utilize quality video systems, which may not only solve a crime at their business, but others as well.” Veal was charged with 3rd degree Burglary, 5th degree Controlled Substances, and 1st degree Damage to Property. As the investigation wraps up, additional charges are expected. burglary arrest – Oct 25 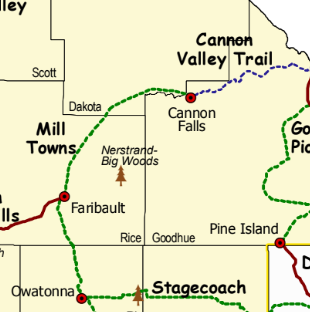 The City of Northfield is asking for $2.25 million for the Mill Towns Trail connection here in Northfield. U.S. Representative Todd Lippert explains, “There’s a few miles of trail that need to be repaired and then some additional miles of trail just south and west of Dundas that would be added.” The idea is to continue connecting from Faribault to Cannon Falls, but because there’s no abandoned railroad track, which the DNR typically uses for trails, this piece is moving slower than average. In terms of economics, Lippert said the Chamber of Commerce told legislators this week , “The average cyclist who’s coming in through the trail, if they’re staying overnight, they’re bringing in $126 in economic benefit to the city. If just passing through it’s $40 to $70, something like that.” Nearly every municipality in the state is asking for infrastructure dollars. In fact, it adds up to about a $5.3 billion total ask. Currently the Democrats are considering $3.5 billion and the Republicans are at $700 million for a bonding bill this session.  SE MN Trail System map

Starting tomorrow, Olive Hupf of Randolph will open her yard for the Shoe Box Mission. Hupf, an 86-year-old dynamo, has been assisting with the Appalachia Kentucky Shoe Box Mission for 16 years. The Archdiocesan Council of Catholic Women added this mission to their Christmas project to fill a semi full of boxes of new, unwrapped gifts for over 1200 youth plus their families and the elderly, and other programs through four different parishes. Terminal Transport of Roseville started providing a semi tractor trailer to haul the gifts to Kentucky and since 2010, Hupf has allowed the semi to park in her yard to make it easier for area folks to drop off their gifts. She said, “It’s open to the public from October 26th through Thursday, November 7th. And it will be packed to the max. My son took over the packing. He can pack like a packrat.” She added, “Everything must be new. No slightly used, nothing.” It’s a Christmas present and Hupf says, often [for the recipients] it’s the only present they get. Please no food. She said, “That’s not a Christmas present for me, that’s for all of us to enjoy, you know what I’m saying.” Hupf stressed that the gifts are given out to any denomination as the parishes open up a free store; she added that those receiving the gifts are very grateful. And SHE is grateful for so many of our communities who give. Click on the link for the location and all of Olive’s contact information, along with a list of suggested items on our website with this story. 2019 Appalachia Christmas Mission (2)

Northfield Promise selected by KaBOOM! for “quality, imaginative play space” for all kids