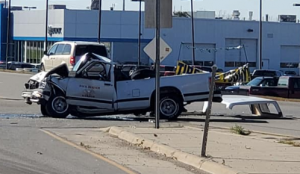 A 23-year-old Faribault man was injured Saturday afternoon when a motorcoach pulled out in front of him on Highway 3. According to the State Patrol, Joshua Kath was driving southbound in his pickup just after 1 p.m. when a Van Hool motorcoach headed east off of Riverview Drive pulled out in front of him. Kath struck the bus in the center, disabling both vehicles and stopping traffic in both directions for some time as Northfield

Fire and MnDOT cleaned up the vehicle fluids. Northfield Police and a State Trooper closed the right lane of northbound Highway 3 for hours as the bus sat waiting for a tow. The bus driver, 67-year-old Isadore McBride of St. Paul and his passenger, 66-year-old Steven Loop of Minneapolis, were uninjured. No alcohol was involved in the crash. According to Kath’s Facebook page, he came out of the crash with just a broken nose and finger. He also stated how lucky he was, as you can tell by the totaled pickup. No word on whether the driver of the bus will be cited. Another crash at the intersection at Heritage Drive occurred yesterday according to a post in Northfield Happenings. Those intersections are uncontrolled and both drivers were attempting to turn left to go north on Highway 3.

A Faribault man was airlifted to North Memorial Hospital after crashing his motorcycle late Saturday night. 31-year-old Jacob Kes was thrown from his motorcycle on Roberds Lake Blvd around 11 p.m. Preliminary investigation shows alcohol may have been a factor in the crash, although the incident is still under investigation, according to Rice County Sheriff Troy Dunn. His office was assisted on scene by the Minnesota State Patrol and the Faribault Police Department, along with Faribault Fire & Rescue and North Ambulance. Dunn added that it is unknown if Kes was wearing a helmet.

Southbound Interstate 35 concrete pavement repairs were completed Friday between Elko New Market and Faribault, according to MnDOT. Work, however, continues on the northbound lanes, and is expected to be complete by Nov. 2, weather permitting.

Lt. Gov. Peggy Flanagan wants to see more women hunting. Northfield Outdoors hosts Dave Vesledahl and Andy Beaham caught up with Flanagan at the Governors Pheasant Opener. It was her first time hunting. She took the DNR online adult hunters course, saying,“…which has been really educational. And then went into the field training and shot some clay pigeons for the first time. And it was after the first shot that I was like, ‘I totally get why people love to do this’.” She also hunted with other women who have never hunted before. She believes it’s important for more women to become more engaged in the outdoors. She said, “…and I think what’s really needed is just people to say, ‘I will help you do this.’ It doesn’t have to be intimidating, you can ask questions. And I think that’s the biggest reason why people don’t get involved; they’re a little nervous, don’t want to look stupid.” She says the role of the DNR is to help remove those obstacles, adding, “I am a Native woman who lives in the suburbs who is going to try hunting for the first time just to send the message that hunters don’t have to look a certain way and I think that that’s important just to even say within our politics and how we ourselves in a place that feels pretty uncomfortable for a lot of folks right now to say we shouldn’t make assumptions about one another.” Out on the range, she hit every clay target! The full show with more interviews including Gov. Walz and DNR Commissioner Sarah Strohmen is on kymnradio.net.