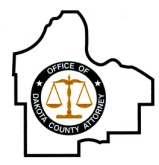 Dakota County Attorney James Backstrom announced that after two criminal trials resulting in hung juries, his office will be dismissing the criminal charges previously filed on September 13, 2018 against Alfred John O’Neill (also known as “Rocky” O’Neill), age 63, of Savage. In May of 2018, the U.S. Center for SafeSport, a nonprofit organization charged with investigating and preventing sex abuse within youth and amateur sports, received a report that during 1988-1989 a female swimmer had been sexually abused on multiple occasions by her former swimming coach, Alfred O’Neill. In their role as a mandated reporter, this information was forwarded to the Burnsville Police Department who began a criminal

investigation. The charges alleged that O’Neill used his position of authority over the then 17-year-old swimmer in order to repeatedly engage her in sexual contact. O’Neill had coached for the Burnsville Swim Club and had been her swimming coach from the time she was 14-years-old.  Read the full press release below from Dakota County Attorney James Backstrom: