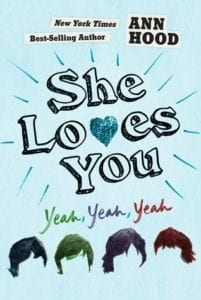 Teri Knight’s guest is New York Times best-selling author, Ann Hood, with her latest novel, “She Loves You, yeah, yeah, yeah”.  A coming of age book set in the 1960’s. The Vietnam War rages overseas, the Beatles have catapulted into stardom, and twelve-year-old, Trudy Mixer is not thrilled with life. She created the Beatles fan club but now there are only three other members–the least popular kids at school.  Trudy decides to turn things around, she’s going to meet Paul McCartney at the Beatles concert and she’s going to take the fan club with her.  And so begins their journey! Hood has written a sincere and funny story, sharing her love of the Beatles and reliving those days. Each chapter is named after a Beatles song that fits perfectly with the story.  annhood.us