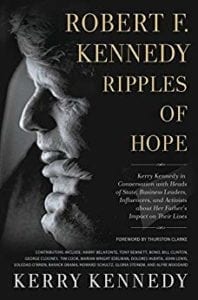 Teri Knight talks with Kerry Kennedy, daughter of Robert F. Kennedy and author of “Robert F. Kennedy Ripples of Hope”.  50 years after his death, his legacy lives on and Kerry’s conversations with heads of state, business leaders, influencers and activists are chronicled in “Ripples of Hope”.  Kerry was just 8 years old when her father died, she shares memories of her childhood and what it was like to be on the train that carried her father as thousands lined the tracks to honor her dad.  She spoke of her dad’s speech in a black neighborhood just an hour after the assassination of Martin Luther King Jr.

Ripples of Hope by Kerry Kennedy