First – how ’bout them tornadoes? Turns out we had 15 tornadoes in Minnesota, plus one in Wisconsin, all as part of the September 20th 2018 outbreak. See more at the NWS website. 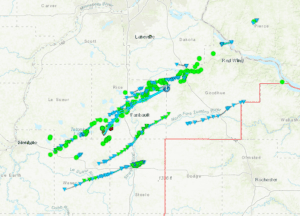 15 tornadoes in MN alone, plus one in Wisconsin

Could this be a sign of global warming?
No, not really, scientist have been careful to not attribute any one event to Anthropogenic Global Warming (AGW) because that is a subtle and tricky thing to do, and making that leap so does not fit with the conservatism most scientists feel.
Unfortunately, critics of the theory drove us all down the wrong path because they are not conservatives, they are just hired pundits, so they are free to ignore evidence.

So, new ideas surface about HOW the climate is changing.

In 1878 John Wesley Powell drew a line in the dirt – he identified the 100th meridian (line of longitude) as the conceptual boundary between the humid east and the arid Western plains. Just west of Omaha.

He recommended Congress use this difference to justify action.

Like in Jaws, politics trumps science, people did not want to give up control – so it was never dealt with.

Out west, whiskey’s for drinking, water’s for fighting. And the fight is coming our way. 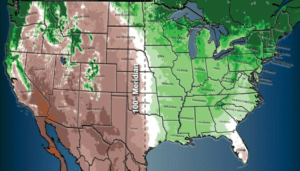 The 100th meridian isn’t moving, but that boundary is coming east.

The 100th Meridian, Where the Great Plains Begin, May Be Shifting. Columbia University.