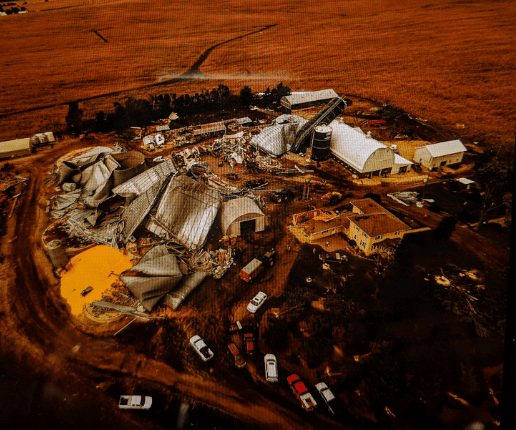 Far-gaze Farms is family.  And family is pulling together after the devastating loss suffered September 20th.  Owner/Operators, the Peterson brothers Brian, Bruce and Chris gathered with elected officials and state agency reps to talk about farmers needs after 7 tornadoes touched down in Rice County.  Bruce, who lives on site, was astounded by the destruction. The whole thing lasted perhaps a minute but took out a lifetime of work. Far-Gaze Farms is a several-thousand-acre operation, growing mostly soybeans and corn and

raising pigs and cattle.  At this point, they’re looking at getting their Shop put together first.  He said, “but it needs to be started early because it’s going to take a long time”  Between concrete, site work and all the construction.  They’d like to get concrete down before the ground freezes but they’ll be rebuilding differently.  They had insurance for the current shop but as they rebuild, he said, “obviously with the 3 boys involved now we didn’t plan on that when we built the shop and started the grain set up.  We squeezed and tugged and made it work and so we’ll change things and it’ll obviously cost more”.  Builders have told the Petersons they can have grain bins for them by Spring, he said, “but builders, they all over-extend themselves and I can’t have a grain system that’s not complete going into harvest, that’s not gonna work and that’s not the way we operate around here”.  The repercussions will resound all over the state as storage was already at a premium. The Petersons are looking at $7 million to rebuild. Turkey Growers Association President Kim Halvorson, who lost her turkey operation, remarked, “in order to do a rebuild we are going to need to look at some major dollars out there in an environment that’s 7.5% interest”.  Dept of Ag Commissioner Dave Fredrickson said, Ad Hoc disaster assistance is an option but that’s up to the Legislature.  In the meantime, the day to day issues include debris inside unharvested cornfields.  They’ll plan to have a person with a skid loader out there as they combine to move debris.  Debris from steel to nails to cabling and insulation, can create major problems for their equipment.  This means they have to move far slower. As for the fields, with wet weather, that downed corn will start germinating which causes quality concerns, there’s mold issues and next year, they’ll have volunteer corn.  It’s going to take a long time to recover but there’s no doubt they will…. They’re farmers, that’s what they do.  [envira-gallery id=”72159″]

Could a Kwik Trip be coming to Dundas?  City Administrator John McCarthy said the City is “pretty excited” about the opportunity to work with Kwik Trip.  They’ve made a proposal that they’re interested in building on the corner of Schilling and Hester St.  Essentially alongside the Menards.  Casey’s looked at the same location a few years ago.  The difference is they intend to use the entire property and have been “extremely willing” to work with the City including traffic management which has been a big concern for the City in that “busy area”.

Heads up as farmers get into their fields

The fields are wet but farmers will be getting out as soon as they can to harvest.  Rice County Sheriff Troy Dunn reminds folks to “proceed carefully”.  Don’t be in a hurry to pass them.  Not just for oncoming cars but also for farm equipment turning onto farm roads.  A car will lose that battle.   Dunn had a warning for farmers who may try to push it saying, “remember to get your sleep, we don’t want you out on the roadways dozing off at the wheel of a big combine or something like that, so be careful out there”.

Additionally from the City:   Construction crews will begin Stage 3 Phase 3 of the Division Street and Seventh Street Reconstruction, Washington Street Mill and Overlay and Various Parking Lot Rehabilitations on Friday October 12, 2018.
Stage 3 Phase 3 includes Washington Street from Eighth Street to Woodley Street, and the City Hall Parking Lot.  A Detour of Washington Street utilizing Division Street will be in place beginning on Friday October 12, 2018. An additional detour for City Hall access will be posted utilizing Union Street to access the back parking lot of City Hall when work begins on Washington Street in front of City Hall. This particular detour to City Hall access is anticipated to be in-place next week. The City of Northfield urges motorists to always drive with caution, slow down in work zones and never enter a road blocked with barriers or cones.  For additional information, contact Sean Simonson at 507-645-3049