Northfield Hospital and Clinics are getting new digs. They will be leasing a new space in Faribault for their ENT and Orthopedic clinic. NH&C CEO Steve Underdahl explained to the Northfield City Council last week that the original space on Lyndale Avenue in Faribault was for ENT only. But in 2017 Summit Orthopedics was displaced from District One Hospital and Underdahl said, “They came and slept on our couch, almost in this ENT clinic. It was an imperfect solution but we needed a place for them to practice so we made some accommodations for them

but it was clearly a temporary arrangement.” A year later, the orthopedists chose to work directly with NH&C to find a solution. With the current clinic not intended for orthopedics, they went looking for another space and found 1980 30th St. NW in Faribault. The 5600 sq. ft. space is already crafted like a clinic so there are less build-out costs. The base rate for a 3-year lease is $11 per sq. ft. with an additional $5.50 per sq. ft. for operating costs. Underdahl added, “One of the things that was negotiated into this is the opportunity to purchase the building with a credit of 25% of the base rent paid should we decide to do that.” The cost for build-out will be about $300,000. The Council unanimously approved the transaction. The goal now is to begin equipment moving and installation in July, and move in August or September. 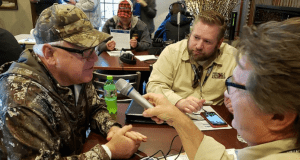 Northfield Outdoors was at the Governor’s Fishing Opener last weekend. Co-host Dave Vesledahl had an opportunity to chat with Governor Tim Walz, who commented on the importance of the fishing opener in terms of the culture of being outdoors and the economics of it. Walz said, “It’s a $15 billion a year industry, it’s as big as anything that we do. We’re a destination. It’s Alaska and us in terms of people that fish; we’re a top 3 in destination of why people come here and it shows these communities, it showcases the diversity of the economy in these communities.” They were in Albert Lea, the southernmost ever for a Fishing Opener. Walz said, “It’s a different type of fishing. I think some of these deep lake anglers are going to have find out that they might have to change their technique a little bit down here but it shows the message that I’ve been delivering the diversity across Minnesota is what makes us strong. Each area has their own unique part of it.” Lieutenant Governor Peggy Flanagan’s crew bested Walz 3-to-1 in the contest. As for the Turkey Opener, which was held in Northfield, he said the wild turkey story is important as they were on the brink of extinction here and brought back. Walz said he had a turkey but couldn’t call him in. DNR Commissioner Sarah Strommen, however, did.

Leave the (blue) light on for them

Leave the light on for them, the blue light that is. It’s National Police Week, an opportunity to thank our officers and remember those who died in the line of duty. The Rice County Sheriff’s Office will host a memorial service on their front steps on Wednesday morning at 8:15 a.m. Law enforcement from around the state will be attending. Northfield Police Chief Monte Nelson said his department will be visiting various organizations within the city this week. It’s a chance to chat and answer any questions and meet new officers. Nelson said they also get visits to the department by school groups. Officers go to a multitude of events, not just as enforcement, but as an opportunity to mingle with the community they serve. Nelson said they that the community also gives back in a number of ways; however, one of them isn’t permissible, Nelson said, “We’ve literally had people try to give us cash and thank us a specific case we’ve worked on and different things and we have to find a gracious way to say thank you but let’s find another place for you to donate that money but thank you for the support.” People drop off cookies and treats and there are times that officers get their meals or beverages paid for at a local restaurant. Nelson said his department is lucky to be a part of this community.