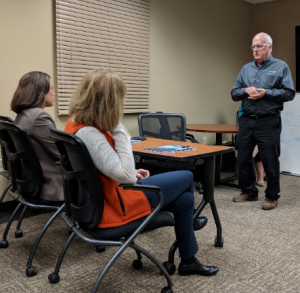 Senator Tina Smith and Representative Angie Craig toured four businesses yesterday with Northfield Chamber of Commerce members, along with city staff including Mayor Rhonda Pownell and some councilors. Aurora Pharmaceutical was first on the list. CEO Michael Stroebel told them their business has been growing at a rate of 20% per year, adding they could grow a lot faster if Federal regulations were reigned in. Five years ago it cost $150,000 to apply for FDA approval of a drug, now it’s $500,000. The rate of approvals have not increased; in fact, they’ve lowered, taking three years. He said it’s a huge drain on the local economy as they send all that money to Washington instead of keeping it here, giving employees raises and reinvesting in the community. He added that those high rates also lower the

competition as startups can’t spend that kind of money. In Europe there may be 20 businesses involved in working on a generic drug; in the US, it’s maybe two. Stroebel added that, a difficult regulatory process is good for the big pharmaceutical companies because they can afford to spend that much money, which takes out the competition. Aurora has 12 products in the pipeline, four are pending approval. Senator Smith asked what do they need to do in Washington. Stroebel said, “I think that the FDA needs to, like any business, typically you have incentives to do a better job. The FDA has none. So the FDA actually gets rewarded for doing a bad job. By delaying approval for a year they get more money.” He wants a system where there’s an incentive to get the job done and communication further opened to the FDA, adding, “What’s significant for us as citizens of America, paying the bills, that we want is an inexpensive a drug supply as can get. We spend billions, trillions of dollars on drugs every year as a government. It makes a lot more sense to make it easy to have competition then. I still believe in all the quality and that stuff, but from a competitive position the government shouldn’t be in the way of that. They shouldn’t be in the way of the device world, they shouldn’t be in the way of the drug world.” A lot of their raw ingredients for compounds are purchased from China. He added that while there are no tariffs now, he’s concerned about what could happen, calling it a national security issue. Aurora is committed to staying in Northfield and currently adding 30,000 square feet for manufacturing along with the purchase of the former Cannon Valley Printing facility, giving them another 10,000-square-foot. We’ll have more on Smith and Craig’s visit as they toured three small downtown businesses as well. 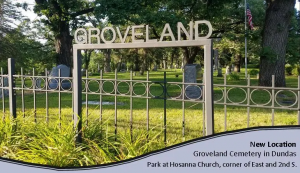 Cemetery Stories is coming to the Groveland Cemetery in Dundas this Saturday. Northfield Historical Society Executive Director Cathy Osterman researches who’s buried in the cemetery to find fascinating stories. She gave a list to the Jr. Curators to do a deeper dive into who the people were. There are six they’ll be highlighting. One is the man who designated Northfield’s Babcock Park. She said he has a very interesting story. Osterman said there’s a teenager who was at Pearl Harbor as well. Tours begin at 4 p.m. and run every hour on the hour until 7 p.m. The tour will start at Hosanna Church, with one story in their cemetery and then wagons will take tour groups to Groveland. Make your reservations now online at northfieldhistory.org or stop into the museum store. This LINK takes you directly to Eventbrite to reserve your spot and time.

The City of Northfield is seeking applicants to fill volunteer positions on several city advisory boards and commissions. Terms are ending at the end of December for several positions. Members participate in advisory, regulatory, governance and oversight activities in a wide variety of fields. Completed board and commission applications may be turned in throughout the year; however, those wanting to be considered for the openings at the beginning of 2020 should submit an application no later than Friday, November 1, 2019. Click on the link for the full press release and links to the application: Board and Commission 2020 recruitment