Yesterday afternoon, Faribault Fire, Police and North Ambulance responded to a fire at 607 Hullet Avenue. When they arrived, light smoke was coming from the home. The occupants believed the fire started in a basement bedroom. Chief Dustin Dienst reports crews were able to get at the fire quickly. Some floor joists were damaged but the fire damage was contained to the room of origin. There is smoke damage throughout the home and all utilities were shut off.  Firefighters kept the fire from causing extensive damage to the structure and its contents. They cleared the scene a couple of hours later. The results of the investigation are not yet available. No one was injured. Full press release: Structure Fire at 607 Hullet Ave (1)

Post Consumer Brands will, once again, try to conduct a routine inspection of the Ames Mill dam and portions of the Malt-O-Meal building foundation at the Cannon River. The work was supposed to have taken place last year, however, heavy rain throughout last Spring, Summer and Fall prevented it. The public can expect to see the use of equipment for re-routing the water to one side of the dam. This will allow teams to perform the inspections. Work is expected to be completed by March 6th, depending on the weather.

Hickey steps down as ED of Ruth’s House

Ruth’s House Executive Director, Ruth Hickey, steps down from her duties as of today. In 2003, she opened the doors of the shelter to help women and children in crisis and has remained a passionate advocate ever since. She writes that it’s time for her to step away to spend more time with her husband and grandchildren. Ruth’s House Board of Directors chose Suzanne Fox to take over the position as of tomorrow. She’s been employed at Ruth’s House for nearly five years and brings over 20 years of experience with her. Hickey will continue in an advisory role. ruthshousemn.org

It’s Random Acts of Kindness week and Northfield Shares is all in. Executive Director Carrie Carrol and Rachel Meisler explaine it’s simply a week to be nice to each other and enjoy the benefits both mentally and physically, as the recipient and the giver, “it really can make a day”. You never know what someone is going through, a small act of kindness can bring some sunshine into, what has been, a gloomy winter. KYMN was officially mooed last week when they brought us a box of muffins, “the goal then is for us to not only share kindness with you, an act of kindness here but then have you pass it on, so we are now challenging you to pass the moo on”. The MOO is available on northfieldshares.org, along with more information and their Facebook page.Tag Northfield Shares when you MOO someone, “see if you can take a picture with them (with their permission), put your little MOO picture out there, tag us on Facebook, then we can kind of generate enthusiasm and see what’s all happening in town and see what’s happening on the facebook page”. They have bingo cards online to download, challenge family and friends to see who can get a bingo first! Their full interview is HERE. 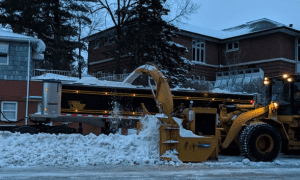 And a random fact: This last snow event, Northfield City crews took out 143 semi-truck loads of snow from the downtown streets and public parking lots. Most of the snow was dumped  near their street shop. Early in the season they dump it in the parking lot of Sechler park.