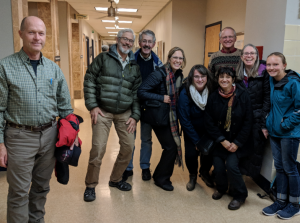 The Northfield City Council voted 5 to 2 in favor of accepting the Climate Action Plan laid out by a citizen committee, along with the Great Plains Institute, over an 18 month period. Co-chair Alex Miller, who is also the Sustainability Program Coordinator at Carleton College, gave an impassioned plea at the open mic saying, “because you are not passing this plan for yourselves or many Northfield residents.  You are however passing this climate action plan for people like me (she’s 26), for your children and grandchildren”. She added, “I’m asking you to invest in our future… to INVEST in OUR future”. Councilor Ness has asked that the plan be moved from the Consent Agenda, saying, “primarily because of the financial impacts. There’s a lot of good information in this plan that affect planet stewardship

and I really applaud the committee for putting this plan together, but I think the citizens have a right to know what the City will spend and what they can expect to spend in implementation of this plan”. While understanding the urgency, he also talked about fiscal responsibility with public money adding, “we need to know is it going to cost $20,000, is it going to cost $200,000, is it going to cost $2 million? Without those numbers I can’t support putting it in place tonight”. Councilor DeLong applauded the group for their work and their passion but also had cost in mind. City Program Coordinator, Beth Kallestad, commented earlier this week on KYMN that, “project costs will start to evolve as we start to work through it but I’d just like to remind folks that the cost of doing nothing is also not free”. The 64 page document has a lot of local information and a goal of going carbon free (or carbon neutral) by 2040. The plan has two main components, decreasing our greenhouse gas emissions through mitigation strategies and becoming more resilient to prepare for a changing climate. The plan is on our website. Mayor Pownell and Administrator Martig were in studio this morning with a full recap of the meeting. That’s posted HERE. 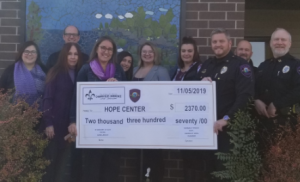 The Faribault Police Department and the Faribault Area Chamber of Commerce and Tourism yesterday presented $2370 to the HOPE Center. The funds were raised during the month of October, Domestic Violence Awareness Month, in memory of their mutual friend, Barb Larson, who was killed in an incident of domestic violence in 2016. The department partnered with the Chamber to sell limited edition purple police patches for a $20 donation. Faribault officers wore the purple patch on their uniforms through the month to help raise awareness of domestic violence in our community. Additional donations were also collected from officers wishing to grow “Beards for Barb”. Chief Andy Bohlen commented, “We are pleased to make this donation to the HOPE Center which provides important support to survivors of domestic violence. We appreciate everyone who donated for this cause.”

Winter has arrived early during Winter Hazard Awareness week. Faribault Fire Chief Dustin Dienst and Emergency Manager, stopped by KYMN on Monday with some tips. First up is relearning winter driving habits. The important lesson is to slow down. That includes when you’re walking too. He said stock up on ice melt! Another thing to remember is to be mindful of what your body is telling you if you’re out in the elements. He said our bodies are designed to let us know when we need to warm up or put on extra layers. Dienst says listen to it. He’s been on calls where someone was just going to get the mail, slipped and fell with no coat on, they’re laying out there with no protection. He said, just throw a coat on! He added that fires increase in the winter due to furnaces, space heaters and holiday cooking and decorating including candles. Carbon monoxide is another major issue. CO detectors are very important. Listen to Dienst’ full interview is HERE.   There is a class on November 12th from 7pm to 8:15pm at the Faribault American Legion. Find out more: Being Prepared When Disaster Strikes  These links provided by Chief Dienst: