Last Thursday Faribault Police were called to the Days Inn to remove a couple of unwanted guests. When they entered the room, there was the odor of marijuana along with a large amount of controlled substances. The Drug Task Force was called in.  22 year old Kenaniah Handlee-Davis, of Albert Lea, admitted it was his room and his methamphetamine. 21 year old Cassandra Shackleford, of Faribault, had stayed the night. Agents found a total of 63 grams of methamphetamine and 56 grams of marijuana belonging to Handlee-Davis, along with baggies, a scale and drug paraphernalia. Shackleford’s wallet contained just over a gram of meth. Handlee-Davis is

charged with 1st degree drug sale and 1st and 5th degree possession. Shackleford is charged with 5th degree possession. Conditional bond for Handlee-Davis has been set at $50,000, his first court appearance on these charges is December 19th. Handlee-Davis is currently on probation for 4th degree criminal sexual conduct of a helpless person out of Freeborn County. Shackleford is on conditional release in Rice County for bringing meth into the jail and 3rd degree burglary. Her bail has been set at $15,000 with conditions.

Providing affordable housing is one of the six priorities in the City of Northfield’s Strategic Plan. Just last week, the Northfield HRA learned they received dollars for the Spring Creek II affordable housing project. Housing Coordinator Janine Atchison explains that it provides housing for those making less than 80% of area median income. Three Rivers Community Action out of Faribault has been a partner both projects in the Southbridge neighborhood. Spring Creek I has 28 units, which filled up right away. Spring Creek II will have 32 units. Director Leah Hall said, “we actually secured over $11 million to make this project possible”. She attributes getting those funds because the Minnesota Housing Finance Agency was attracted to this project because of the Northfield HRA involvement by donating land and passed Council passed a resolution to obligate TIF. She added that, “that was the key for us to be able to compete and secure funds”. Hall said there are other funding streams including, “an affordable first mortgage just like you would get on your home that will cover a chunk of the funding. They also added in some deferred loans to the project and then also, a piece of the funding are tax credits“. With funding in place, they’ll solidify the design plans with the city. These are rentals that will be owned by Three Rivers and managed by Lloyd Management. Hall expects a waiting list to fill up quickly. Information on applying will be coming. The full interview is HERE.

Dundas Council approved a 7% tax levy last night. The valuation of your property will alter your actual payment. However, if your home value stayed the same, your taxes would decrease slightly. Administrator Jenelle Teppen added that they also awarded the sale of the bonds for the new City Hall at 2.2% for 20 years. We will have more on the meeting tomorrow. 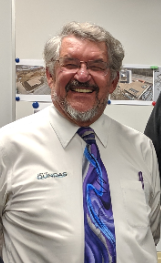 Former Dundas Administrator John McCarthy was given a nice sendoff yesterday afternoon before his final Council meeting. Community members and City officials from neighboring cities praised his efforts on behalf of Dundas. Mayor Glenn Switzer commented that when John started they had no Public Works Department, adding, “we had a good Police Department where we were renting some space. We now have a beautiful Public Works for trucks and equipment and staffed and a building for the Police Department and, obviously, you probably saw there was some construction going on [the new City Hall], he’s kind of ushered in the beginning of the next phase of Dundas”. Switzer added that the City of Dundas has a Standard & Poors rating of AA- due to McCarthy’s meticulous record keeping. He added, “thank you for your service from myself, the friendship and just how you served the community has been honorable“. McCarthy thanked the Mayor and staff. Former Northfield Administrator Tim Madigan said McCarthy was a problem solver not a problem maker. McCarthy’s two daughters came from out of town to celebrate with their dad, along with their mom. Teppen was hired in June to take over as Administrator.

John his wife and daughters