The price has gone up for the roundabout at Jefferson Pkwy and Hwy 246. The Northfield council heard an update from City Engineer Dave Bennett as they discussed calling for a public hearing on the Intention to Issue General Obligation Street Reconstruction Bonds specifically for the roundabout. He said, “the cost for the project has increased mainly, it’s in the staff report, due to, with the underpasses the roundabout had to be raised a little bit to ensure that they would not go under water during larger rain events”. There were also poor soils found and additional utility work for drainage and

storm sewer pipes related to raising the roundabout. The cost went from an estimated $3.3 million to $4.7 million. Bennett said the funding for that $1.4 million gap should come from stormwater funds and additional state aid, but could, however, have an impact beyond the 5 year capital plan, including finishing paving Spring Creek Rd. Council  voted to prepare bonds not to exceed $1.5 million with a public hearing on Feb. 4th, which will include a project update. Council will be discussing the roundabout design further. Some additional information HERE. You can also watch the council meeting HERE.

Agents with the Cannon River Drug Task Force set up two separate drug buys with a Confidential Source in early June last year in Rice County. 62 year old David Brian Anderson of Shakopee sold them over 34 grams of methamphetamine. He’s been charged with 1st and 2nd degree drug sale and 3rd degree possession, all felonies. The most serious charge carries up to 30 years in prison. Bail has been set at $40,000 with conditions. His first court appearance is January 22nd.

The Economic Development Authority (EDA) approved $20,000 per year for the next three years to pilot a Facade Improvement Program, designed to encourage downtown building owners to reinvest in the exterior of their buildings. The EDA will match private investment one-to-one up to $10,000.  Coordinator Nate Carlson said this is part of the EDA’s Strategic Plan, commenting at their December meeting, he said, “I think we’re hoping to get at least 6 projects for the next 3 years then we’ll a good sense of success”.  Mike Strobel, EDA member and part owner of Aurora Pharmaceutical, who took over the space at 512 Division St. said that it’s very expensive to renovate those buildings and if you are right next to another building that you share a facade but they can’t pay for their end, it will get costlier. He felt this was a good step by the EDA, adding that just a little tuckpointing repair can be tens of thousands of dollars. Chair Andrew Ehrsmann was not enthused about putting dollars and resources into the facades, stating, “I don’t see this reflected in the strategic plan or it coming from business owners asking for it, like I walk down main street or drive  down main street and it seems like businesses are flourishing enough to take care of their own basic needs and improvements”. Carlson noted that there’s already been some interest in the program. Treasurer, Britt Akerman, added, “it’s not enough money to make a massive difference to them but it’s enough to incentivize them to make the necessary improvements or repairs to these buildings”. They’ll be accepting applications between February 1st and March 15th. More information on how to apply can be found on the city’s website: ci.northfeild.mn.us/edagrant 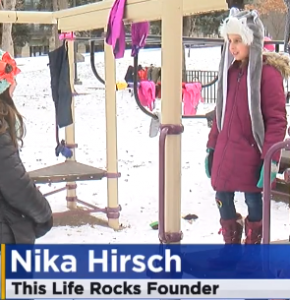 WCCO-TV reported on “Bundle Up, MN!”.  The Spread Sunshine Gang started the event to collect and donate winter items to the needy. This year they collected more than 1,300 coats, hats, mittens, scarves, boots, and snow pants, and will drop them off at four different parks in Minneapolis and St. Paul throughout the winter. The Hirschs are from Northfield, and 9-year-old Nika helped collect 500 items just from the city of Northfield alone! The full story and video is on our Facebook page. Scroll down to find it. Or click HERE.  If you would like to help out, click here.